How we created the award winning Rotorua zipline tour

Like all good things this took time – the concept for Rotorua Canopy Tours began way back in 2008. An idea that zipline tours could be a fun and exciting way to transport people through a truly awesome New Zealand environment.

James Fitzgerald was dreaming up his idea of an Rotorua zipline tour company and had a vision of creating a world class experience. It would be in a native forest full of ancient trees, birds singing everywhere and people laughing, learning and having the time of their lives. But there were a few hurdles – firstly where was this forest? How would we build it? How could we pay for this? And how on earth do you run an zipline company? 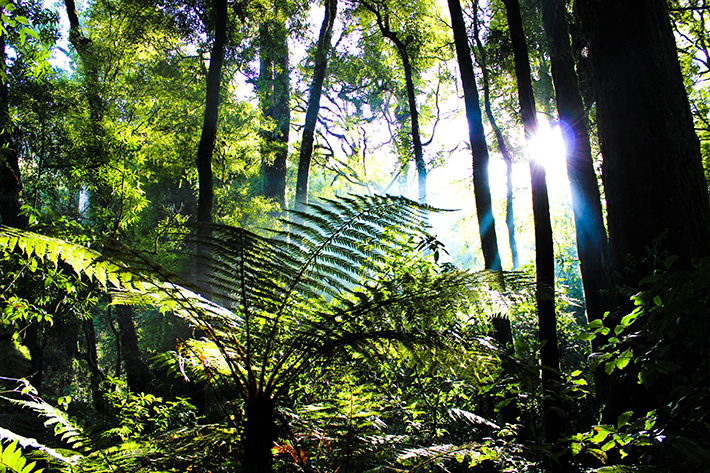 Photo: Finding the prefect spot for the Rotorua zipline tour was the first step in creating a world class visitor experience.

Years went by before the puzzle pieces started falling into place – James found the perfect native forest for his zipline tour on the outskirts of Rotorua. He also found someone to share his dream, university mate Andrew Blackford, who happened to be an engineer! Andrew had some great ideas and believed he could design and build James’ system for the Rotorua zipline tour. With a few research trips to zipline tours overseas, James and Andrew learnt that with a bit of trial and error they could create something truly incredible. 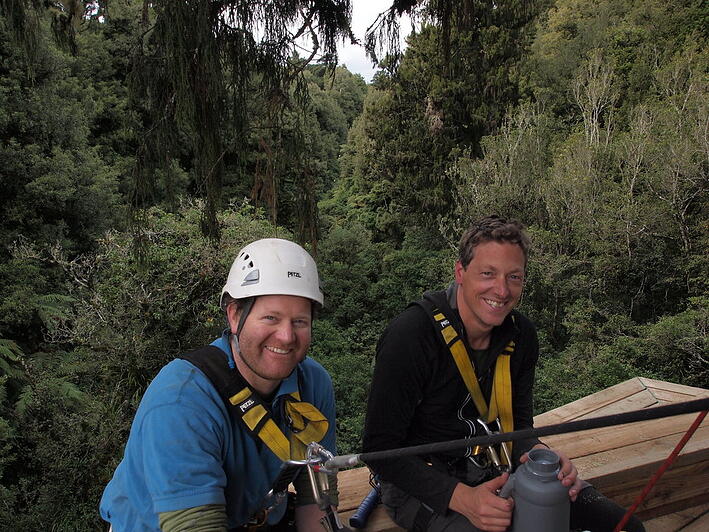 Photo: Nick and Andrew having a break while building the highest platform on the Original Canopy Tour course in 2012, 22 meters off the ground!

The construction of the course for our Rotorua zipline tour

The real work began on 1 March 2012 when James and Andrew left their jobs and walked into the Dansey Road Scenic Reserve to build what would become The Original Canopy Tour.

But on the third day of building the course three cop cars showed up. Locals had begun to get suspicious as the forest had been so uncared for and had zero activity in the past. But James pulled out his concession card from DOC giving him permission to use the forest and instead got yarning to the police officers. It turned out that one of the policemen was the coach of a local hockey team who were looking for a way to do some fundraising, so James spent the evening at the police officers house organising a fundraiser for the hockey team to unload wood into the forest the next day.

James and Andrew discovered very quickly that there were a few secret ingredients they needed to build a Rotoura zipline tour. They needed to get the ziplines across the forest, so in came a bit of kiwi ingenuity. They built a spud gun and spent their evenings playing in different parks firing tennis balls and potatoes around the suburbs. 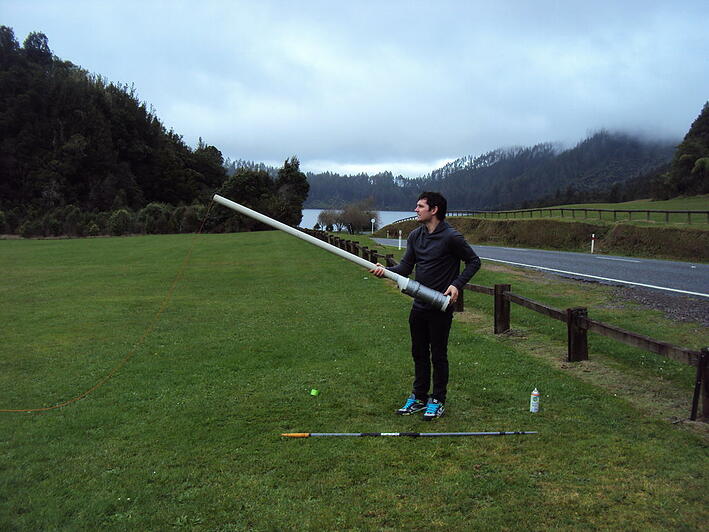 Photo: Testing the spud gun before putting it to work in the forest.

They had a few mishaps, including a flame shooting out 4 metres and a hot potato flying off somewhere, but the good old kiwi jandal was the thing that did the trick. The humble flip flop folded in half got just the right amount of compression and with the spud gun and some fishing wire, that’s how the lines were launched. Then heavy-duty wire pulled into place.

The duo were just starting out and had pretty small budgets, so all the materials for the platforms had to be carried in by hand. James wasn’t great with a hammer so instead got the job of hauling in every single piece of wood into the forest by hand. James isn’t a big guy but lost a massive 15 kilos in process.

The other secret ingredient they needed was lots of help and support from family and friends. It was tough work, but after 6 months, the course was complete and James and Andrew knew they had the infrastructure for an incredible forest experience.

The next step was to find some staff. Luck stayed on their side when they found some champions looking for a new path in life. We welcomed Dan and Alex as our first guides for the Rotorua zipline tour! Now bring on the customers… 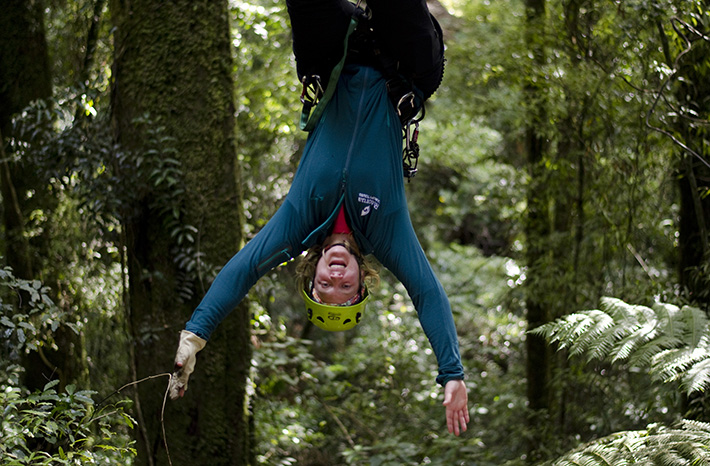 Photo: Alex shows off her skills upside down on a zipline – she was one of the first guides at Rotorua Canopy Tours.

Customers proved hard to come by in the beginning. Charlotte and John from England were the first ever customers. James found them brewing soup in their campervan at the Rotorua Lakefront. He knocked on their window and didn’t let them go until they agreed to come experience one of our Rotorua zipline tour – he even bribed them with pizza. In fact, that’s how we found our first few customers, knocking on campervan doors at the lakefront and talking up this crazy adventure that no one had ever heard of! Filling the zipline tours was hard work. While it looked cool, people weren’t prepared to take a risk spending a few hundred dollars on something unknown.

Slowly we gained momentum, customers were talking about us and the media began to hear of this amazing experience that is working to save the native forest. Papers started running stories and news channels started playing footage. We were getting amazing reviews from our customers and our little team began to grow. We went from 4 to 12 to 25 then 60. It was awesome to see our Rotorua zipline tour taking off!

As we started taking on more staff to run more zipline tours, we quickly outgrew our premises in suburban Rotorua. In 2016 we bought some land and developed purpose built headquarters near the Northern entrance of Rotorua (closer to the forest). 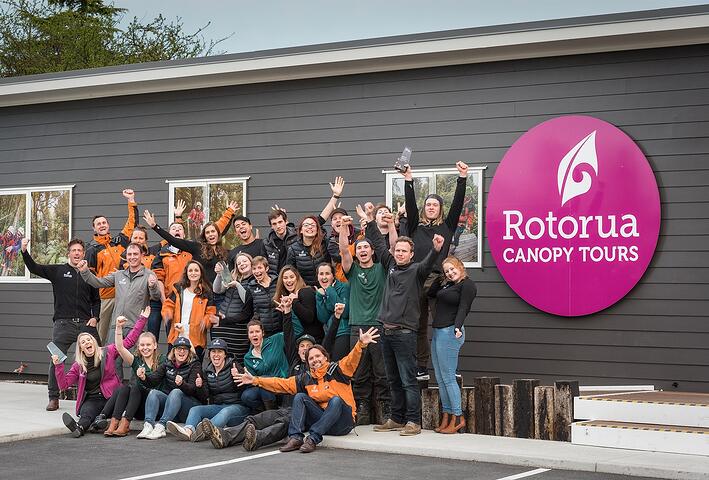 Rotorua Canopy Tours was becoming known as one of the best experiences in New Zealand. In 2016 we received the Supreme Award, Sustainability Award and Visitor Experience Award at the Air New Zealand Tourism Awards. The judges said at the heart of Rotorua Canopy Tours’ success is an exceptional visitor experience that has raised the bar of personalisation, authenticity and fun. In the same year at the Westpac Rotorua Business Awards we also won the awards for Business of the Year, Attractions Business Award and the Attractions Business Award.

The Original Canopy Tour was a huge success and our Rotorua Canopy Tours’ guests were asking for more, so in 2017 we decided it was time to build the best zipline tour in New Zealand… and the world – the Ultimate Canopy Tour!

The build of this tour was a trickier than the Original Canopy Tour as it is located deeper in the forest and incorporates more features and longer ziplines. But, with a bigger budget, the spud gun was put aside, instead drones and helicopters were brought in. A small group of Rotorua Canopy Tour guides, along with the guidance of our engineer genius, Andrew and guide Scott built the course over a 6 month period. Together they produced a longer, faster and even more spectacular Rotorua zipline tour. 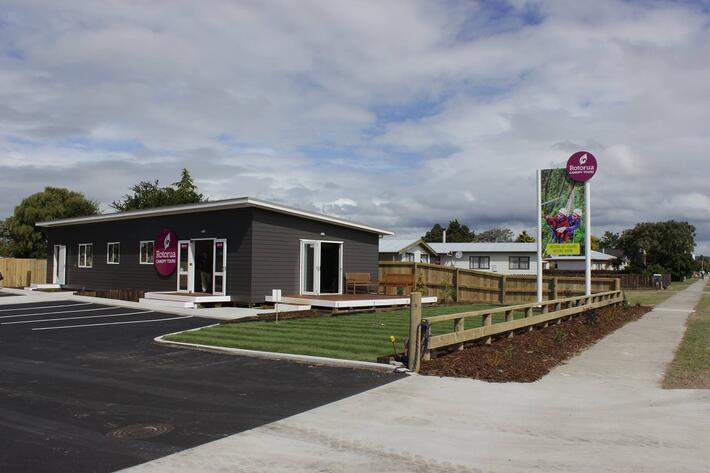 Photo: Our Rotorua zipline tours have been departing from our headquarters at 147 Fairy Springs Road since 2015.

Conservation has been an important part of Rotorua Canopy Tours since the beginning. When James and Andrew first found the forest it was in poor health and had a total rat and possum infestation. James wanted to hear the bird song ringing loud through the forest and made a promise to restore the reserve to see the canopy flourish once again, as it did before humans arrived in New Zealand.

Together with our customers we have now created a forest eco sanctuary, with a trapping network covering 250 hectares. The forest is becoming louder and is now the place that James had once dreamed of. We have even discovered some rare animals in the forest since our trapping work has begun. Find out how our eco tours restored an entire native forest here. 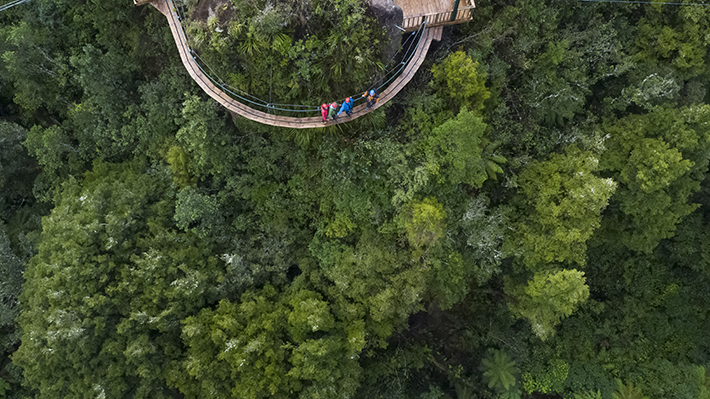 Where we are today

We continue to delight and inspire our visitors, most recently being named TripAdvisor’s Best Nature Activity in the world! Also a winner of the 100% Pure New Zealand Experience Awards for the second year in a row.

Even though our team has grown and the day to day operations has changed dramatically since we began, our team still has a connection to the company and the cause.

We still have heaps of plans for the future of Rotorua Canopy Tours such as opening up walking tracks in part of the forest for the public. While we have some new challenges in front of us in the wake of covid-19, we couldn’t be more proud of how far we’ve come with our unique twist on zipline adventures – so watch this space!